Results for H1 2022 : strong growth in revenue and EBITDA

Stéphane Pallez, Chairwoman and CEO of the FDJ Group, said: "The second quarter confirmed the positive trend at the start of the year, notably for the Lottery. Our business grew over the half year, both at points of sale and in digital. Given the deterioration in the global economic environment, the Group remains cautious but confident in its outlook, based on its extensive and responsible gaming model. We continue to invest to back the development of our activities, including those of Payment and Services, with to two acquisitions, Aleda and L’Addition. The Group is pursuing its sustainable and profitable growth strategy for the benefit of all its stakeholders. "

Key figures (in millions of euros)

* Revenue: net gaming revenue and revenue from other activities

Given the extent of the fires that have affected French forests these previous weeks, and keeping with its commitment to preserving forest biodiversity in France, the FDJ group will donate €200,000 to the "ONF- Agir pour la Forêt" fund managed by the French National Forestry Office to participate in the national mobilization and contribute to restoring the destroyed forests.

FDJ obtained an "A" carbon score and was included in the Vérité40 index established by Axylia and composed of the 40 best carbon scores of the SBF 120 companies.

The performance in H1 2022 was amplified by a basis of comparison affected by the health crisis in H1 2021, as the various restrictions introduced to contain the Covid-19 pandemic were not fully lifted until the beginning of June 2021.

Including income from other activities, which amounted to €30 million, the Group's half-yearly revenue amounted to €1,212 million, an increase of 12%.

Sales costs amounted to €652 million. €474 million represented PoS commissions, whose increase (+10% or +€42 million) is correlated with that of point-of-sale stakes, and €178 million for other sales costs, of which the 12% increase (+€19 million) reflects the reduced commercial support in H1 2021.

Administrative and general expenses mainly include personnel and operating expenses for central functions, as well as building and IT infrastructure costs. They amounted to €88 million, down €2 million compared to H1 2021.

Other operating income and expenses amounted to -€6 million and mainly include the amortisation charge for exclusive gaming exploitation rights.

Other non-recurring operating profit and expenses amounted to -€6 million, compared to -€1 million in H1 2021.

The Group’s organisation is based on three operating segments: two Business Units (BUs), Lottery and Sports Betting, and the diversification activities, which include three activities under development (International, Payment and Services, and Entertainment), with cross-functional support functions (notably customer, distribution and information systems), and the holding company, which mainly includes overheads.

The contribution margin is one of the key performance indicators for these segments. It is the difference between segment revenue and cost of sales (including PoS commissions), and the marketing and communication expenses (excluding depreciation and amortisation) allocated to them.

The Lottery BU's revenue in H1 2022 was €946 million. Its 17% increase was in line with the increase in stakes of €1,138 million. In H1 2021, the measures taken by the French authorities to contain the Covid-19 pandemic affected point-of-sale activity, particularly in bars.

Sales costs amounted to €514 million, up 17% (+€73 million) compared to H1 2021. They mainly correspond to PoS commissions for €387 million, whose 16% increase is in line with the increase in the network's stakes over the period.

Marketing and communication expenses increased by 25% to €86 million.

In H1 2022, the player payout ratio for sports betting was 76.0%, compared to 77.5% in H1 2021, when the main competitions were won by the favourites. This decline in the PPO explains the difference between the change in revenue (-5% to €232 million) and stakes (-11%). The change in stakes mainly reflects a high basis of comparison with UEFA Euro 2020 football tournament, which started on 11 June 2021, as well as a less busy calendar and less attractive competitions in H1 2022.

Sales costs amounted to €110 million, down 13% (-€16 million) compared to H1 2021. They mainly correspond to PoS commissions, which changed in line with network stakes.

Diversification activities recorded a revenue of €34 million, up €4 million compared to H1 2021. This increase is linked to the growth in international B2B revenue and to the growth in the point-of-sale payment activity for the DGFiP. The contribution margin for diversification activities was -€10 million at end-June 2022, reflecting the investment effort undertaken to develop these activities.

One indicator of the Group's cash position is the net cash surplus. At 30 June 2022, this amounted to €891 million. Its change compared to the €916 million at 31 December 2021 is attributable chiefly to:

For information, the net cash surplus at the end of June cannot be extrapolated to the end of December as there are significant calendar effects on the settlement of public levies, in particular an advance payment on public levies in December.

Post-closing event: FDJ acquires Aleda and L’Addition to accelerate the development of its Payment and Services business

On 15 July, FDJ completed the acquisition of Aleda, with which it had entered into exclusive negotiations on 7 July 2022. Aleda is a specialist in cash collection and payment equipment and services for local businesses, in particular bars, tobacconists and newsagents.

FDJ also announced today the acquisition of L’Addition, a specialist in cash collection and payment equipment and services for cafés, bars, hotels and restaurants.

After the launch of a point-of-sale payment offer in 2020 for the DGFiP, these acquisitions are part of the development strategy of FDJ's Payment and Services business, with the aim of becoming the leading French network in point-of-sale payment and collection. In addition, they reinforce the Group's commitment to supporting and assisting local businesses by offering them value-added services to help manage and develop their points of sale.

The completion of these transactions is subject to the usual conditions precedent, in particular the authorisation of the French Antitrust Authority.

The performance of the first half of the year was better than the Group's forecast. However, given the current uncertainties regarding the economic environment in the second half of the year, the Group is not revising its 2022 outlook at this stage.

FDJ’s Board of Directors met on 28 July 2022 and examined the consolidated financial statements for the six months ended 30 June 2022, which were prepared under its responsibility.

The Group's next financial communication

FDJ will release its end-September 2022 revenue on Thursday 13 October after the close of trading.

* Stakes reflect wagers by players, and do not constitute the revenue of the FDJ Group 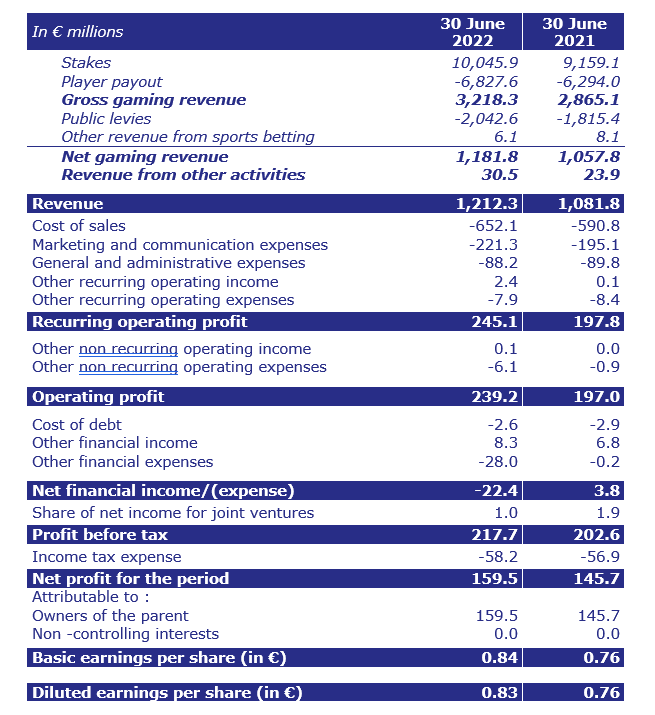 [1] Gross Gaming Revenue (GGR) is calculated as the difference between stakes and the share attributable to winners.

[2] Net Gaming Revenue (NGR) corresponds to the GGR net of public levies. It represents FDJ's remuneration for its gaming activities.